I’d like to say there’s something from my garden here, or even the CSA, but there’s not. But it’s damned good anyway.

Using Silver Palate granola, which occasionally goes on steep sale at Foodtown (I think I’m the only reason they order more – it’s a staple here, simply perfect oatmeal), Green Wind Farms Grade A medium amber maple syrup, toasted almonds, lots of raisins, brown sugar, generous splash vanilla, lots of cinnamon, a few big spoonfuls organic peanut butter, and Ghirardelli chocolate baking chips (the kind that look more like currency than morsels), small dash or two of table salt, stirred together, laid out on the Silpat, in the oven on 325 for 20 minutes. Stir, back in the oven for another 20 more, then out of the oven for a good stir, final addition of chopped chocolate baking chips, and a sprinkling of fleur de sel, and voila! My after dinner, this means now, indulgence.

This recipe, by the way, is a variation of that which appears on the Silver Palate box. Pshaw to anyone who would pooh-pooh following something from the back of a box of food. I’m sure plenty of kids became better readers – or at least maze players – from many blurry-eyed mornings staring down the back of a Cheerios box. 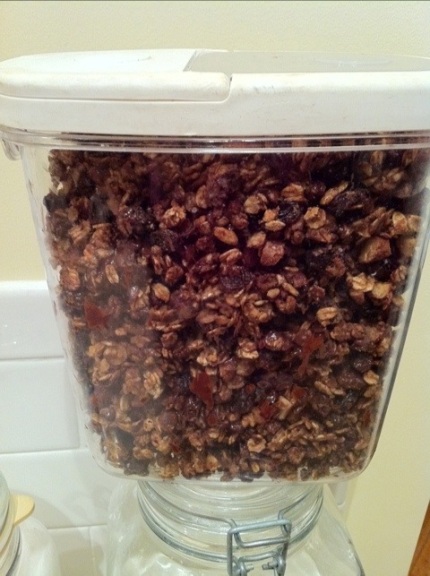