This may well be one of the most pressing conflicts of our generation.  How do we let loose the reins enough to ensure freedom, yet pull them in enough to protect the citizenry from threats to our health and safety?

Our fellow reveler Ralph posted a thought-provoking comment recently, noting a post on another website.  The host of that site (which could be described by some as a preppers site) was sharing an email received from a reader who had purchased seeds from e-Bay and was visited by a federal agent who seized their seeds, stating it was because of the risk of disease.  Here is what Ralph said about it.  I think his contemplation well reflects the mixed feelings many of us have about the tension between the need for privacy/freedom and the desire for protection and safety/security.

I just read a story at:
http://www.preparednesspro.com/usda-agents-drive-4-hours-confiscate-10-seeds-purchased-ebay/
that I received an email about. Having just read the title and brief description from the email I thought I was going to read yet another story about our rights being taken away. After reading the story I am not so sure my initial thoughts were correct. Ignoring the feelings (mine included) about possible govt invasion into our lives, I was reminded of a question on one of the shows I listen to asking why certain plants and seeds were regulated and not allowed to be sent to certain states. Outwardly it seemed, even to me, that some of the regulations were put in place to prevent competition with commercial producers. Some plants were simply invasive and would cause all kinds of damage if let loose in the wrong places.

In spite of searching for the actual explanation I haven’t been able to locate it among the hundreds of shows on the site, so until I can locate it here’s what I can remember. Basically it boiled down to plant diseases and virus infected plants. While it seems that prohibiting certain grape seeds into California or orange seeds into Florida are giving large producers a monopoly on their markets, the real reason is that bringing a plant disease into these areas by infected plants or seeds could destroy commercial crops possibly ruining commercial producers and cause economic problems. Reading seed catalogs you can see notes that a particular seed resists some disease or virus. Seeds, somewhat like people may be immune to certain illnesses, but if a ‘foreign’ illness is brought in it will often spread ‘like wildfire’.

As for the corn in the story, corn can be pollinated by other corn miles away, so a contaminated field can spread disease far and wide. We have already seen this with GMO corn. While no fan of needless regulation, it is possible the seeds in question should not have been allowed to grow. That being the case, I would have to ask why e-Bay was selling them.

Here’s the link to the USDA site which I am going to look through when I have more time:
http://www.aphis.usda.gov/import_export/plants/plant_imports/smalllots_seed.shtml

Thanks, Ralph, for this thought-provoking comment.  I am curious to know what readers are thinking about recent news about the National Security Administration’s data collection efforts and former CIA employee, Edward Snowden’s leaking the U.S. government’s mass surveillance practices.  I’m also wondering what others are thinking about the Illinois Deparment of Agriculture’s seizure of honeybees resistant to Monsanto’s RoundUp which were subsequently reportedly destroyed, the passing of the bill now known as the “Monsanto Protection Act,” and a slow but sure shift in farming legislation to acknowledge food and farming going on in the east coast.  There’s lots going on these days.  I’m wondering how everyone else is processing it all.

So, you know the deal.  Go ahead … gimme the dirt!

Fellow revelers, help me out with the following question that was posed:

What types of flowers are the readers out there growing? I’ve almost ignored flowers since I started my renewed interest in the garden. I have a few calendulas (pot marigolds) growing in a small pot, and a handful of neglected bulbs in the ground along one fence which keep coming back year after year. Any ideas on some nice flowers to grow?

As for me, in the front yard I have my famous day lilies from Wisconsin alternating with the hostas (which bloom every year now that they’ve matured – this is one of the things that I very much love about hostas, which can otherwise seem kinda bland).  Again behind the front row of flowers/hostas, I have some white small flowers whose name I cannot remember.  I want to say nasturtium but I know that’s not it (anyone who can take a peek at my photo here, and help me out, please do).  The native plant garden is just behind that, with a black-eyed susan that’s now giving me plenty of blooms.  I love having this in my yard.  It reminds me of the Replacements song, I Saw Susan Dancing in the Rain.  I think next year I may grow daisies just b/c of Prince’s song that has the line in it: I’m blinded by the daisies in your yard…

A few days ago I bought some bulbs at Home Depot because they were 75% off, and they looked pretty.  Hard to resist.  I’m planning on keeping them for next spring, though I’m not sure how well they keep (I’m assuming there will be no problem with them but have no experience to go on here).  They’re gladiolas and dutch irises (LOVE the smell of these).  A friend, many moons back, gave me crocus bulbs but it was in my pre-garden days and I never did get them in the ground.  I may get some next year; these would be inspired by the Joni Mitchell song about having crocuses to bring to school tomorrow…

QUESTION: Has anyone else’s garden been inspired by a song? Any recommendations for any particular flowers?  I used to keep marigolds around some of my vegetable plants but haven’t needed them this year. 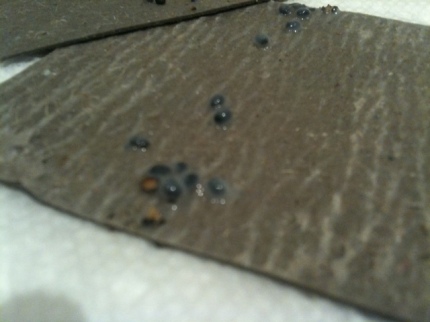 And maybe these are oversoaked? Does anyone know? Can you over-soak a seed? I did go longer than the two to four hours on the instructions but I thought that would rather kickstart them.

QUESTION: should I use or toss this seed?  Anyone ever use the Triscuit card seeds on the back of the box? Anyone know whether they are trustworthy?  Where are these seeds from? What about the glue that keeps the two sides of the card together – harmless or heinous?  Do seeds grow mold?  Does it matter?  Should I use these seeds anyway?  Anyone see anything other than basil or dill on the Triscuit’s box?  Triscuit’s seed cards: marketing gimmick, good samaritanism, or terrorist plot?  Go ahead … gimme the dirt.